Find out how much you can save with Tiviti - click here to request a full quote.

Watch our latest webinar on 'unlocking social housing IT resource to focus on tenant value!'

Your employees have stepped up to hybrid working. Have you?
Paying the bills: why B2B telecoms billing is changing
More insights
April 28, 2021
BLOG
2 MINUTES

How can SD-WAN help UK businesses?

All over the world, businesses are exploring ways in which they can move their IT into the cloud. This trend has gathered pace to the point that, according to Forbes, as much as 80% of enterprise IT will be in the cloud by 2025.

One popular method of embracing the possibilities of cloud is SD-WAN (Software-Defined WAN), where software and the cloud combine to deliver wireless connectivity to a range of locations. The global SD-WAN market is expected to be worth as much as £30billion by 2030 - but the implementation and benefits of it aren’t as clear-cut as they might seem.

In this blog, we’ll take a closer look at how SD-WAN works, what UK-based businesses can get out of it, and why SD-WAN on its own doesn’t represent a catch-all solution for network management.

In a nutshell, SD-WAN relieves the burden of network management and functionality duties from the branch routers a business will host on-premise, and moves it into virtualised software that operates in the cloud. Using software to optimise connectivity and resiliency, networks operate in a simpler, more reliable way.

The benefits that businesses can enjoy when deploying SD-WAN include (but are not necessarily limited to):

The shift to hybrid working has forced networking and security teams to rethink their approach to connectivity. In this guide, we highlight the key considerations of SD-WAN for UK businesses. 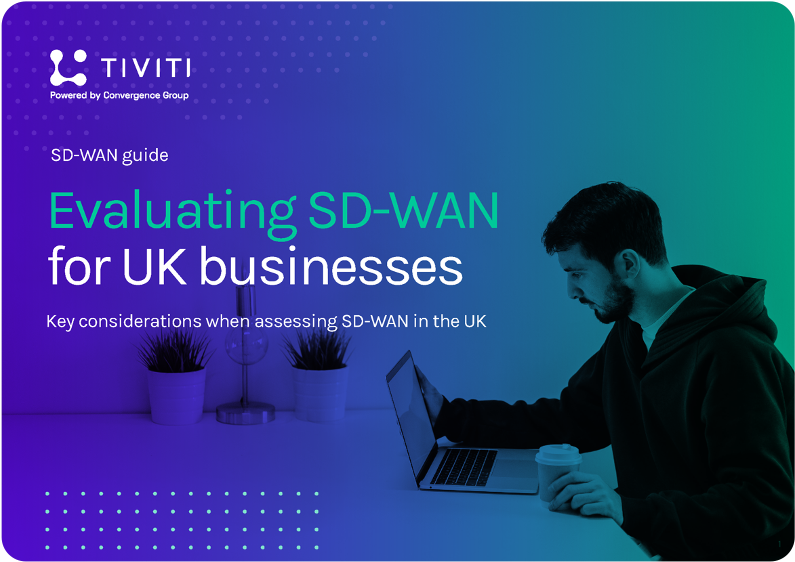 The unique benefit for UK businesses

SD-WAN originally gained popularity in the United States, where its adoption yielded significant cost savings over networking via Multi-Protocol Label Switching (MPLS). However, as MPLS connectivity is much cheaper to acquire in the UK than it is in the US, those financial benefits don’t necessarily apply to businesses here. This makes it much harder to make a case for managing a UK-based network through SD-WAN alone.

But SD-WAN and MPLS should not be considered an ‘either-or’ choice - the low-cost availability of MPLS means it’s entirely possible to combine the two. Under this ‘hybrid’ model, SD-WAN would operate as a complementary ‘overlay’ technology for the network, with MPLS as the ‘underlay’. SD-WAN provides the network protocols (peer-to-peer, IP, virtualised LAN, etc.) and MPLS provides the actual connectivity.

A useful analogy is a car is on a long journey, with a choice of two routes: a quiet toll road (a private MPLS connection), or the busier main motorway which is prone to heavy traffic (i.e. the public internet). SD-WAN is the Sat-Nav that plots out the route and finds the fastest way through the traffic. If SD-WAN is overlaid on the public internet, it will be like the car running on the busy motorway competing with lots of other traffic, meaning the Sat-Nav will potentially be less effective. But when SD-WAN works in conjunction with a private MPLS ‘toll road’, competing traffic will be minimised and the car can run at full speed.

Nonetheless, there are a number of other considerations to take into account when deploying this hybrid solution, in particular security. Under SD-WAN, each network site is effectively covered by its own individual firewall, and so is vulnerable to a DDoS attack. On the other hand, MPLS uses a centralised firewall which ensures that individual sites and applications are unaffected by such an attack.

The importance of efficient, resilient and secure cloud-based business networking has been highlighted by the COVID-19 pandemic and the resulting growth of remote working.

Research from databasix has found that nearly 70% of organisations don’t deploy anti-virus software on work-issued devices, and that remote workers are responsible for a fifth of security breaches. At a time when phishing attempts have increased sixfold, it highlights the importance for strong security over a more distributed network, an area in which a combination of SD-WAN and MPLS can be highly beneficial.

Both SD-WAN and MPLS bring their own set of benefits to the table. The good news for UK-based businesses is that there is no reason why they can’t enjoy the best of both.

To get a more detailed view on SD-WAN, and learn why a hybrid approach with MPLS is the best way forward, download our free guide. You’ll get more technical details on how a hybrid network can operate in practice, and see how it compares to Secure Access Service Edge (SASE) when deployed for remote workers.

Your employees have stepped up to hybrid working. Have you?

The pandemic forced everyone to send workforces home to work remotely. A year or so down the line, many organisations are enabling their workforces to make the transition back to the office. However, many employees have found they like working from home at least some of the time and want to keep it that way. This ‘hybrid working’ model is both a practical and permanent reality - but it needs a practical, permanent approach to go with it.

A fundamental change in the way that businesses operate means a rethink around networking and connectivity is essential. But is SD-WAN the catch-all solution that many hype it up to be?

Paying the bills: why B2B telecoms billing is changing

Think about all the technology you use within your business over the course of a normal day. Then think about how you operated 20 years ago, and the relatively small amount of technology available to us, and how limited it was. A lot has changed in the last two decades.

Find out how much you can save with Tiviti

Tiviti can dramatically reduce the cost of network ownership. Just add your number of users, buildings and floors into our CaaS Calculator to see a typical monthly bill.